Nathan Adelson Hospice - Who We Are 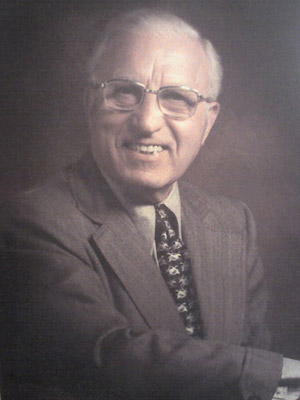 If men live on through their deeds, the memory of Nathan Adelson will never fade. He was a beloved, caring man who was a visionary and a dreamer. At the same time, he was a pragmatic, bottom-line oriented professional lauded for his business acumen. He was never satisfied with the way things were only with how they could be.

Born in Omaha, NE, raised in Los Angeles, CA, Nate sold his successful supermarket operations in Los Angeles in 1961 and moved to Las Vegas, NV with his wife Pearl at the insistence of his son Merv and friend Irwin Molasky. Merv and Irwin had just completed building Nevada’s largest medical facility, Sunrise Hospital, and convinced Nate that his true calling was in the hospital field. Nate’s compassion for his fellow man and the desire to make life for others more bearable brought him to Sunrise.

Nate became Sunrise Hospital’s administrator, where his efforts went far beyond what his title would indicate. He was devoted to aiding the needy and healing the sick. Always looking for a better way, he insisted on only the most sophisticated equipment; he always encouraged the doctors to employ the latest techniques, and he elevated patient care far beyond the national hospital standards.

Known simply and most affectionately as “Mr. A" he knew the name of every doctor, every nurse, every technician, every employee at Sunrise, and was genuinely concerned about them and the welfare of their families. He also felt a personal responsibility for the patients, making regular visits to all the rooms and the wards, paying particular attention to the care and comfort of the terminally ill.

Adelson’s humanitarian deeds did not end with Sunrise Hospital. He also served as a director on the Board of the Federation of American Hospitals and was an active member of numerous civic and religious groups. He sat on boards of the United Way, Child Haven, and the Las Vegas Symphony.  He was a member of Temple Beth Am and the Masons in Los Angeles, and Temple Beth Sholom and Nate Mack B’nai B’rith Lodge in Las Vegas.

When cancer took Nathan Adelson in 1978, Merv, Irwin and other close family and friends wanted to keep alive what Nate stood for and believed in. They established a hospice, which, like Nate himself, is dedicated to maintaining patients' dignity,  easing suffering and improving the quality of life even in death. Today, Nathan Adelson Hospice stands as a most fitting tribute to a very special man.