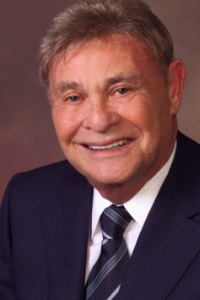 For more than 50 years, Irwin Molasky played a significant role in the phenomenal growth of the Las Vegas valley. As Chairman of The Molasky Group of Companies, he was an innovator in the creation of much of the Las Vegas skyline.

In a city where being bigger, better and first are paramount, Molasky is known as a trendsetter. He and business partner Merv Adelson were responsible for the city’s first private hospital, the 688-bed Sunrise Hospital Surgical Center & Medical Center, which now has 28 operating rooms and a nationally renowned neo-natal unit; Paradise Palms, the area’s first master-planned community, which captured national honors; seven golf courses and their communities; thousands of apartment communities; the first high-rise office building in downtown Las Vegas, Bank of America Plaza; and designed and developed the state’s first and largest enclosed shopping mall, the 1,350,000-square-foot Boulevard Mall. In addition, Molasky brought many new nationally known “big-box” retailers to Nevada such as Best Buy, Borders Books and Barnes & Noble.

He ignited the luxury high-rise condominium market with Park Towers at Hughes Center, which Town and Country named “one of the five best buildings in the United States.”

A true community leader and entrepreneur, Molasky has made a number of influential contributions to Nevada, including building the state’s first hospice, The Nathan Adelson Hospice, that serves the terminally ill and their families, regardless of their ability to pay. He and Merv Adelson were key figures in the development of the University of Nevada, Las Vegas through a donation of 45 prime acres of land at Flamingo Road and Maryland Parkway. Molasky also helped to locate McCarran International Airport at its current site and assisted with the land purchase for the Las Vegas Convention Center.

In 1981 Molasky formed and became Founding Chairman of the UNLV Foundation, which to date has raised more than $700 million to provide support for students and faculty. He serves on the Board of the Future for the National Judicial College in Reno.

Molasky was a founder and served as an Officer of the Board of Directors of Lorimar Entertainment, a conglomerate of television, broadcasting and print media.

Molasky was featured in the book "The First 100," the Review-Journal's award-winning collection of biographies profiling 100 people who shaped Southern Nevada during the last 100 years. He has been honored by the Lied Institute for Real Estate Studies and was recently inducted into the Nevada Business Hall of Fame. In December 2009, Molasky was given an honorary Doctorate of Humane Letters from University of Nevada Las Vegas recognizing him for his significant contributions to higher education, the Las Vegas community and State of Nevada.