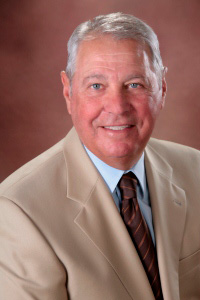 Lou Silvestri has been a Nevada resident since 1957.  He received his Bachelor of Arts degree from the University of Nevada, Reno and a Master’s Degree in Education Administration from the University of Nevada, Las Vegas.  Mr. Silvestri had a very successful career with the Clark County School District for 27 years holding various leadership positions as a teacher, school administrator and central office administrator.

After retiring from the school district in 1989, Mr. Silvestri began a second career in Hotel Administration.  He is the Executive Director of Development for the Venetian and Palazzo Hotels both Five-Diamond luxury resorts on the Las Vegas Strip.

Mr. Silvestri has served on the Board of Trustees at Nathan Adelson Hospice for 6 years.  He lives in Las Vegas with his wife Linda and their sons Rob and Jeff.