What Makes a Good Therapy Dog? 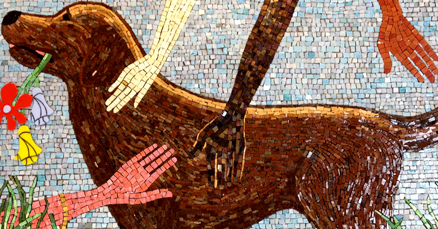 A good therapy dog has extensive obedience training, loves strangers, can focus on the job at hand even if other dogs are present, is comfortable being touched or hugged by a frail population (or even a patient’s children or grandchildren), and is able to deal with stressful situations in a calm manner. Sometimes that may mean that the handler should wait until the dog is a little older but that is something that an observant handler will know while training the animal. Is he prone to jumping up on people, pawing at them, licking them? Those are undesirable traits that are more commonly seen in younger dogs.

I frequently get calls from prospective pet therapists who tell me, “My dog loves everyone.” That may be true but he still needs the discipline training. Unbridled jumping and licking are seldom attractive to people who don’t know your dog and who can’t possibly appreciate him the way you do.

The handler must also always be alert to her dog’s reactions. Sometimes even the best behaved of dogs will not hit it off with someone and something will go awry. I’ve heard handlers say that the dog was well-behaved and the person did not behave appropriately so whatever went wrong was not the dog’s fault. In a hospice setting, the dog owner must assume that there will be people who lose their balance, some who are frail, some with dementia who may grab at the dog, etc. You can almost count on those things happening occasionally. So it’s really important that the dog’s demeanor is calm under any circumstance. The handler must know her dog inside and out, what he’s good at, what triggers irritate him, etc. That’s the best way to avoid pitfalls.

Having said that, one of the most important parts of any pet therapy team is the handler because her vibes will travel straight down the leash to the animal and affect his behavior. Dogs take their cues from the handler and so if the handler is nervous, the dog will be nervous; if the handler is antsy, the dog will be antsy. So it’s equally important for the handler to be comfortable in a hospice setting, meeting and talking with strangers. She must not be intimidated by the healthcare setting where she is likely to run across bandages; frail, discolored skin; sutures; slurred speech; perhaps even visible wounds. I once had a pet therapist tell me she only wanted to greet people in the hallways so as not to spend a lot of time in the rooms because she didn’t really like talking to people. Since her dog’s attitude was equally reserved, they eventually chose to work in a setting where they didn’t have to engage in much conversation.

Sometimes, however, the dog, for whatever reason, simply doesn’t want to go into a room. Pay close attention to the dog’s reaction and honor his feelings. I once watched a handler approach a room where her dog put the brakes on, clearly sending a signal that he didn’t want to go in the room, and she pulled the dog in the room anyway. That sends the wrong message to the patient. People can read rejection a million miles away and if the dog has an aversion to the room, he should not be forced into it.

Hospices often have patients with frail skin – frail enough that one lick can leave an abrasion. And there are germs that can be transferred between patients this way. Many handlers think it’s sweet when their dog chooses to show this sign of affection to a patient, but it may not be safe and should be discouraged.