Soothing music is always welcome in the hospice environment. It has the capacity to reduce physical symptoms of pain and agitation, and alleviate feelings of fear, anxiety and loneliness. This can add immensely to a patient’s quality of life and a family’s impressions of a “good” hospice experience. 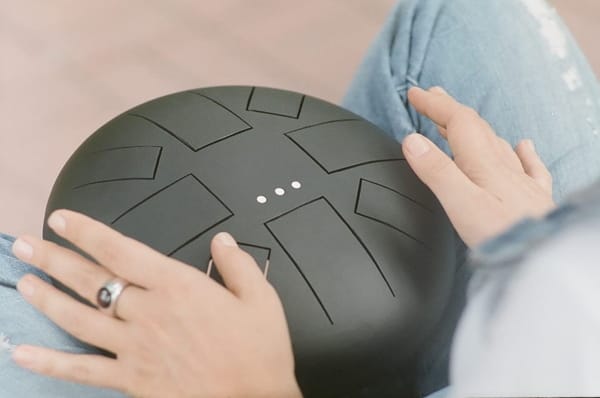 We have recently added a talented musician with a unique instrument to our two in-patient facilities. His musical instrument goes by various descriptions but is commonly called a Siberian tongue drum. The metal has “tongues” cut into it and they can be tuned to different scales – pentatonic (the most popular), diatonic or chromatic. It is played either with the fingers or with soft mallets.  But it’s the tone that’s truly magical! The instrument itself looks like a metal spaceship but has a muted bell-like tone that’s soft and soothing.

According to an online article on Buzzle, “Problems like excessive worry, anxiety, or depression create a chaotic situation in the brain; it hampers its working power, reasoning ability, and execution of conventional tasks becomes difficult. It happens because of reduced levels of serotonin. Fifty million brain cells are affected by the levels of serotonin. Music effects a steep rise in the levels of serotonin, which has positive influences on brain cells controlling mood. Thus, music is often used to treat anxiety disorders.” It’s not unusual to see a marked change in a patient’s emotions after having a musician spend some time with them. As good as it is for the patients, it’s often exactly what stressed family members need as well, so music is an amazing modality to be able to offer at Nathan Adelson Hospice.